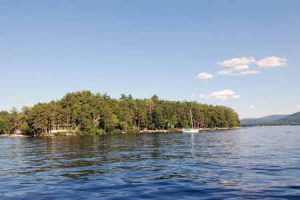 Welch Island is located in Gilford, New Hampshire on the shores of Lake Winnipesaukee. This island is 210 acres in size. Welch Island is one of over approx. 274 islands on Lake Winnipesaukee, which spans approx. 22.9 miles with a width of approx. 7.5 miles at its widest point. The Lake includes approx. 288 miles of shoreline with approx.. 72 sq. mi. of water area. The maximum water depth is approx. 187 feet deep with an average depth of 62 feet with approx. 625 billion gallons of water. It’s the 6th largest natural lake completely inside the U.S. borders.
Welch Island was originally claimed by Jonathan Moulton and Abraham Welch in the late 1700’s. In 1823 Pickering Smith bought the island and sold it to George Washington Leavitt, who pastured sheep for several years on the island. It was then sold repeatedly, ending with the Winnipesaukee Lake Cotton and Wool Manufacturing Company of Lake Village acquiring most of it by 1875. When the company was unsuccessful it sold its island shares to Joseph Varney of Wolfeboro. The island changed hands multiple times again ending with John French, who utilized the introduction of the railroad lines through Gilford to sell off lots and bring more people to the island.

In 1936 the efforts of one of the islanders, named Mary Donsker, culminated in the production of the 1st issue of the Welch Island Gazette. This weekly newsletter included information about neighbors, announcements, social events, and advertisements.

When you walk around the island, you can see evidence from the early years of grazing and where at one time there were open fields and stone walls that were constructed probably up until the 1920’s. History indicates that sheep were raised on the island and brought over by a barge, where they remained until the lake froze over and they were led back over the ice to the mainland. Corn was raised on the island on a corn field to provide feed for the sheep herd. 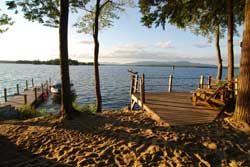 Welch Island is geographically in the center of the lake, which is one of its strongest attributes. It provides easy accessibility to all of the towns from a boating perspective where island residents can boat to a number of town docking facilities in Gilford, Laconia, Wolfeboro, Meredith, Center Harbor, and Alton Bay. Many fine restaurants can be enjoyed, and islanders can get out and shop and partake in some of the mainland activities. Additionally, Gilford features the Glendale town docks in which a number of them can be utilized by island residents on a time restricted basis. Parking for town residents and islanders is also provided by utilizing a town sticker for tax payers. A boat launch is also located at the Glendale town docks, as well as the department of safety services. The Lion’s Den restaurant is located right behind the town docks for easy access.

There are many marinas in the Gilford area and yacht clubs that provide easy boating access to Welch Island. Many outstanding panoramic views are offered at all locations of the island including dramatic views of Mount Washington, New Hampshire’s highest peak at 6,288 feet. The island is oval shaped and includes a private yacht club on the westerly side with a beautiful sandy beach. The south easterly side of the island is preserved in conservation with a nice bathing beach 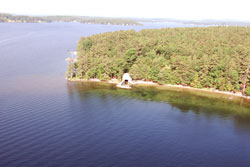 called Lunch Rock. Many walking trails meander throughout the island providing island residents with exercise trails, nature trails, and walking trails for their pets. Many fine island cottages have been constructed over the years. Some of them are true vintage cottages built at the turn of the century that offer a glimpse of what it was like in those early years. On the northerly side of the island Welch Island faces the Forty Islands, which starts with the Fish Island and includes a series of small islands rich with wildlife and great fishing spots. This provides an ideal location for kayaking and canoeing where you can explore the intricacies of these scenic islands up to as far as Steamboat Island, which includes a scenic little walk bridge. Beautiful sunsets are enjoyed from the westerly and northwesterly sides, and early morning sunrises with early sun is featured on the easterly and south easterly sides of the island.
-Information obtained from the Thompson-Ames Historical Society and other sources.