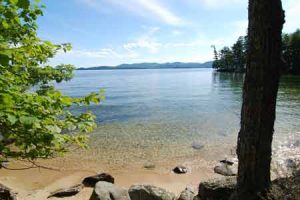 Cow Island is located in Tuftonboro, New Hampshire on the shores of Lake Winnipesaukee. Cow Island is 522 acres in size and is the 2nd largest non-bridged island on Lake Winnipesaukee. Cow Island is one of over approx. 274 islands on Lake Winnipesaukee, which spans  approx. 22.9 miles with a width of approx. 7.5 miles at its widest point. The Lake includes approx. 288 miles of shoreline with approx.. 72 sq. mi. of water area. The maximum water depth is approx. 187 feet deep with an average depth of 62 feet with approx. 625 billion gallons of water. It’s the 6th largest natural lake completely inside the U.S. borders.
Cow Island was the site for the Guernsey cows when they were first shipped into U.S. from Scotland. The following is from what is posted at Cow Island:

“Guernsey Cattle Imported to this Island in 1831:
About 1830 or 1831, Captain Prince, a sea captain sailing out of Boston, stopped at the Island of Guernsey, and brought back to this country 3 young animals, two heifers and a bull. These he gave to his brother who lived on a farm, on what was then known as Cow Island in Lake Winnipesaukee. There wa sno American Guernsey Cattle Club then, nor any official records kept. However by means of a complete diary of Joseph Barnard of Hopkinton, New Hampshire, and a Private Herd Book of John F. Jones of Concord, New Hampshire, a Guernsey enthusiast, a complete hisotry was found of the decendants of two of the original imported animals. Through these records the American Guernsey Cattle Club was able to trace the lineage of 156 animals and accept them in the Herd Register. The two original animals were registered as Pillsbury Bull 5816 and Pillsbury Cow 11310, having been taken by General Moody A. Pillsbury to his farm in West Boscawen, New Hampshire.
By act of the New Hampshire Legislature in 1933, this island was renamed—Guernsey Island.”

The northern part of the island was developed in the 1960’s, while the southern part of the island became Camp Idlewild in the 1980’s. When the camp closed the land was subdivided, but there are still playing fields, fireplaces, and two beaches deeded with the common area.
Cow Island has a wide variety of homes with reasonable prices, as well as vintage homes and newer cottages. The westerly side of the island looks across “The Broads” of Winnipesaukee and offers breathtaking sunsets. The easterly side of the island faces Tuftonboro Neck and provides stunning sunrises and midafternoon sun. Several marinas can be accessed from the Tuftonboro side of Cow Island.